Did you know that you can see a huge geoglyph or formation of a rhino – the “Sky Rhino” on the Mapesu property from an airplane when you fly over the territory?

What are geoglyphs? They are highly creative and artistic designs, lines, and geometrical etchings or motifs that are created by utilizing rocks, trees, gravel or other elements of the landscape. Geoglyphs are found throughout the world with many being thousands of years old. Thus, far no one knows why they were made nor for what purpose. Many theories abound from being mere decorations to offerings to the Gods, to even signs from extra-terrestrials.

The most famous is the ancient Nazca Lines in Peru, which features over 300 geometric figures, 70 animals and plant all of which covers hundreds of miles. The beautiful monkey from the Nazca Lines in Peru measures 93 m (310 ft) by 58 m (190 ft) and the infamous stylized pelican measures 285 meters tall (935 ft). Their work remained largely unknown until researchers in airplanes re-‘discovered’ the drawings in the 1930s. Although smaller than their counterparts, the Cerro Unitas, crafted on the hills of Chile, contains thousands of geoglyphs and biomorphs and are believed to be created between 1000 and 1400 CE. The famous Uffington White Horse in Oxfordshire, England is around 110 meters tall and thought to be 3000 years old.

We are trying to enter the Sky Rhino into the Guinness Book of Records as the largest single animal geoglyph on earth. It was created by many people as a symbol of defiance and to generate attention to the perilous situation of the rhino.

There are less than 25,000 rhinos left in the world — the fact that there more rhinos poached than those being born means that extinction is possible within 20 years. Over 80% of them roam in South Africa, where both government rangers in National Parks and private anti-poaching units in private game reserves fight a heroic battle against poachers.

The Mapesu’s Sky Rhino is part of an effort to reduce mopane encroachment (caused from years of overgrazing by domesticated cattle) by restoring some of the area to its original fertile grasslands.  The ‘Sky Rhino’ encloses a sea of yellow grass (Panicum maximum) while on the exterior stands a bountiful ocean of green, brown and grey mopane trees. The grassy plains feed antelopes, zebra, and wildebeest, and with some help a couple of white rhinos from our Rescue Rhino Project, which especially loves this type of grass.

So the next time you fly in or out of South Africa, through this particular route, make sure you grab your camera and take a picture of our Sky Rhino and please share it on social media! If you want to be involved in our efforts to save the rhino, contact us for information. 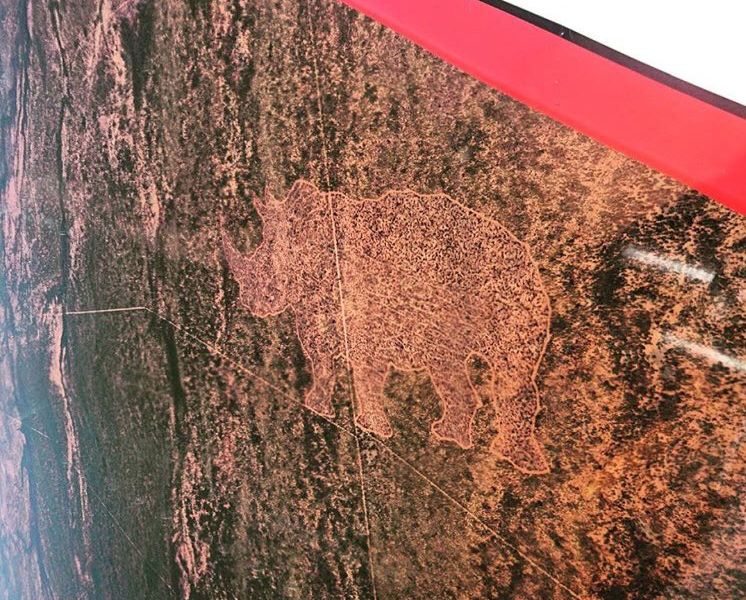